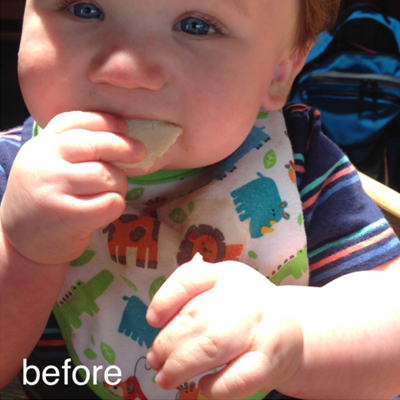 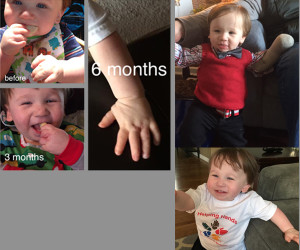 At our 20 week ultrasound, we went in excited to find out the sex of our baby and left with news that there was most likely something seriously wrong with our boy. The ultrasound had revealed that our child had fetal ascites, which is fluid in the abdomen. This is normally a symptom of a chromosomal or other serious condition. There were no other abnormalities seen at this time, but the doctors decided it would be best to have an amniocentesis and blood work done. All tests performed came back normal, so we were monitored by ultrasound & non stress tests every two weeks. We watched as the ascites remained and then slowly started to resolve. By 37 weeks, no more fluid could be found. We were hopeful that our baby was completely healthy, but also prepared for the worst.

At 39 weeks, a repeat C-section was performed and our baby boy, Chase Robert, was born. The first thing I remember seeing was a look of concern on the pediatric team’s faces. They called my husband over to show him something and I immediately saw the concern in his eyes. I started asking over and over what was wrong, and it was finally explained to me that he had some digits fused. This came as a complete surprise to us even after so many ultrasounds. Chase’s syndactyly is simple complete of his left hand – digits 3 & 4, his right foot – digits 2 & 3, and his left foot -digits 2, 3 & 4. Simple syndactyly has no bone involvement; therefore it cannot be picked up on ultrasound. Complete means the webbing goes all the way to the tips of his fingers & toes.

After a comprehensive exam in the NICU and x-rays of his hands and feet, we were finally able to have our beautiful baby boy in the room with us. At this point in time, syndactyly and an undescended testicle were the only conditions found. Genetic testing of the cord blood was performed which also came back normal. I think I asked the pediatricians a dozen times what the word was again for his fingers: Syndactyly, a new word in my vocabulary that I would begin to use a lot.

It took Chase’s big Sister Audrey several months to even notice his fingers & toes. When we explained what it was she just shrugged her shoulders & moved on.

When Chase was 3 months old, we were referred to Dr. Charles Goldfarb for a surgery consultation. Dr. Goldfarb came highly recommended to us by other doctors, as well as research I did myself. We felt very comfortable with his plan to perform surgery on Chase’s hand around 1-1/2 years old. Dr. Goldfarb recommended that we leave Chase’s toes alone since it is a strictly cosmetic procedure which will not affect his function or shoe wear.

Surgery was done when Chase was 17 months old at St. Louis Children’s Hospital. Everything went as planned and we were sent home the same day. The separation did require a few small skin grafts. Skin was taken from the crease on the inside of his elbow and has healed beautifully. A soft bandage that came up to his upper arm was placed on Chase. He managed to work his way out of it after the first few days. We returned to Children’s to have another bandage put on, this time a more durable semi-hard cast was placed.

Three weeks later, we returned to have the cast removed. His hand was healing just like it should be, so we moved to a small bandage and splint at night. Within two months, all the scabs were gone and Chase was using his hand normally. We continued to wrap his hand at night and did scar massage for a few more months. Just six months later, his hand looks great and you can hardly even notice that his fingers have been surgically separated.

We do not know of any family history of syndactyly and Chase is our second child. His sister does not have any of the same abnormalities as him. Chase also spent a few months wearing a helmet for plagiocephaly, had surgery at seven months to repair his undescended testicle, and has a few misshapen vertebrae. He had an echocardiogram and MRI of his brain, these were also normal. We have also discovered that Chase has a condition called primary lymphedema, which causes swelling in his lower body. We think this explains the fetal ascites. Lymphedema has no cure, so Chase will have this for the rest of his life. We are however learning how to manage it through daily massage & compression garments. Although none of the testing done has come back abnormal, we suspect that all of these abnormalities are linked together in some way. This is not to say there is anything “wrong” with Chase. He is a cute, happy, healthy toddler with a larger than life personality who is all boy and doing everything he should, and shouldn’t, be doing!

We are so very pleased with the outcome of his surgery and only wish we had known when he was born that syndactyly is not a scary thing, but something that is treatable and makes Chase unique. We absolutely adore him and can’t wait to see what the future holds for him!

Owen was born March 18, 2016 in the frank breech position. We didn’t know until he was born that he had Syndactyly and a few other…

About a month ago we sent out a letter asking for volunteer stories about bullying. We are so grateful for our followers and group members to…

Because my husband, his dad, his uncle, and granddad had complex syndactyly, we knew that our son, Rivers, would likely have it as well. Before trying…

Polydactyly literally means “extra digits.” There may be an extra thumb, small finger, or, less commonly, an extra digit in the central part of the hand….

Use this form to find things you need on this site