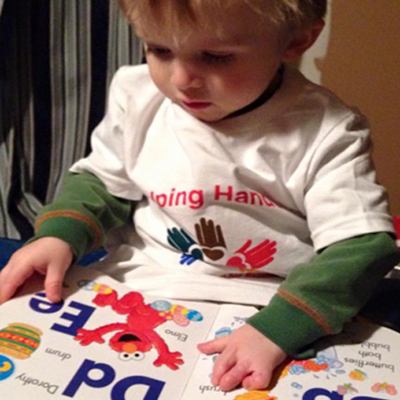 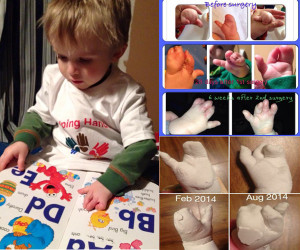 Throughout my pregnancy everything was going great; our baby was perfect! We had a few ultrasounds done and everything seemed just fine. We went in for our scheduled C-section at 39 weeks. As soon as the baby arrived they told my husband it was a BOY – my husband stood up and sat back down with a concerned look on his face. Our son was turning blue and the doctor asked if we “saw his hand?” (I don’t know exactly what was all being said)

As they carried my son to the bed I can hear someone say, “He’s not getting oxygen.” (even though I could hear him crying)

Then they call over a NICU doctor who was asking, “How long has he been without oxygen?”

My heart stopped. Crying, I asked my husband “What’s wrong? And what’s wrong with his hand?”

I could see him from slightly behind me and he was blue with doctors and nurses surrounding him. My husband reassures me that he’s fine and he’s perfect! I smiled and laid there while watching as they gave him oxygen. As they were about to take him to the NICU, my doctor told them to let me see him before they took him. I got to touch my new baby for a second before they took him away. As they proceeded to stitch me back up all I could do was pray and know he was in good hands.

Almost 5 hours later they finally told us what was going on. Here is where things get complicated. Levi had developed a condition call PPHN (Persistent Pulmonary Hypertension of the Newborn) which is a very difficult thing to explain. After they took Levi off the C-PAP machine they began to administer oxygen through the nose as well as a feeding tube. Let’s just say he was a “fighter” because he kept ripping out his oxygen and his feeding tube!

We were not able to hold Levi due to the PPHN. The doctors told us that he would be in the NICU for a minimum of a week. The PPHN cleared on its own as soon as he started breathing on his own. During that time, the doctors told us that Levi had complex syndactyly of the left hand. We were then referred to a specialist (we were told he was one of the top specialists for his condition so we were thrilled!). We had never heard of syndactyly before and we were finally going to get some real answers. We were able to get him in within a month. We booked the hotel, we made the 4+ hour drive, we finally get into the doctor’s office only to hear the doctor say “Sorry, I do not treat that condition. I treat simple syndactyly, not complex.” We were very disappointed for more reasons than one. So now it was up to us to figure things out.

After that failed appointment, we began to do the research on our own. We decided to look into Shriners Hospital for Children In Chicago. We called Shriners and explained to them Levi’s condition and they were able to get us an appointment. They made us feel at home and they answered every single question we had (and I had a lot of questions!) At our first appointment, X-rays were taken and Levi was then diagnosed with complete complex syndactyly.

Levi had his first surgery done at 11 months old. Then again when he was 16 months old he had his second surgery performed. Levi is such an angel baby and has an amazing big brother, Lincoln who adores him to pieces! We are very blessed to have two amazing children.

Owen was born March 18, 2016 in the frank breech position. We didn’t know until he was born that he had Syndactyly and a few other…

About a month ago we sent out a letter asking for volunteer stories about bullying. We are so grateful for our followers and group members to…

Because my husband, his dad, his uncle, and granddad had complex syndactyly, we knew that our son, Rivers, would likely have it as well. Before trying…

Polydactyly literally means “extra digits.” There may be an extra thumb, small finger, or, less commonly, an extra digit in the central part of the hand….

Use this form to find things you need on this site